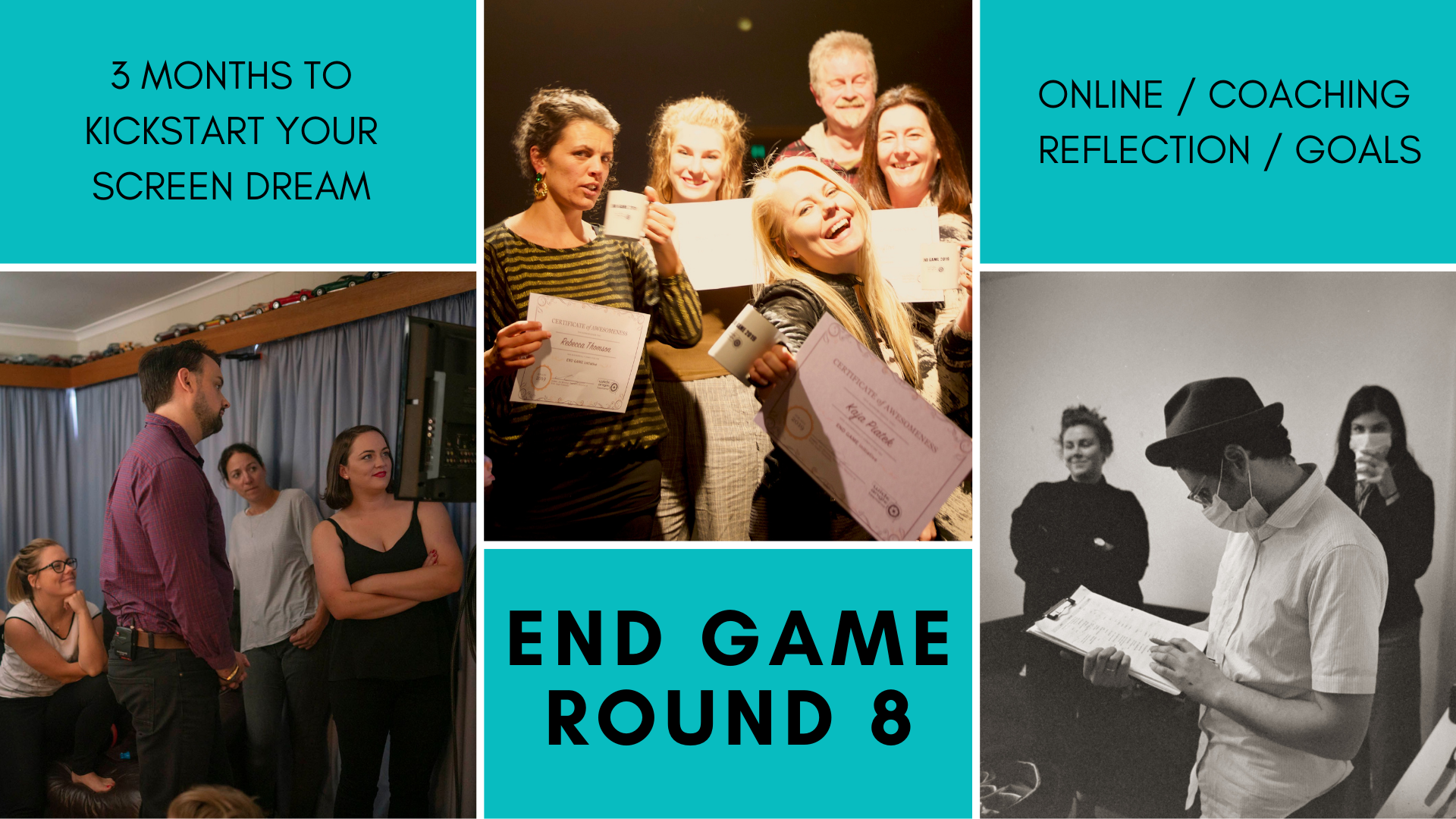 Applications are currently closed. Please check back soon for dates for Round 9.

Wide Angle Tasmania provides Tasmanian screen practitioners with the framework and support to work strategically on achieving their dream. End Game will help you to define your long-term screen aspiration and then identify a first step that can be achieved in 3 months.

Each round, filmmakers will be selected to participate in a 3 month programme of goal-setting, peer support, coaching and reflection designed to help you transform your great idea into action. End Game is delivered online to Tasmanian screen practitioners - our coach is Emma Wilson. The celebration event at the end of the three months will be held at Washington Street, Hobart.

Each participant will receive;

End Game is designed to:

Selection for End Game is competitive and will be assessed on the application and workbook submitted. The full course cost is $120 (includes GST payable). If you are keen to be involved but are unable to pay the full fee upfront, please get in touch with WAT's Executive Director Abi Binning to discuss your situation directly. WAT may be able to provide additional support for active contributors to the screen community. WAT’s course refund policy can be found here.

To help apply - download the Goal setting workbook here and the flowchart here.

"Wide Angle’s End Game Program is a brilliant opportunity, and a wonderful learning experience.  I had two mentors, generous and thoughtful support throughout, and professional analysis and appraisal of my work.  While I didn’t reach my goal of turning a novel manuscript into a feature script, the process of developing a script breakdown, and conferring on each draft, has helped me feel confident about taking the project on to completion, not least because I have a much clearer perspective about what I need to finish it to a professional standard.  I’m very grateful to have been allowed the End Game experience.  Thank you!" BP Marshall

"This is my second time taking part in End Game. Yet again it has given me the structure, motivation and confidence to embark on a development project. I can honestly say that without this initiative and the positive feedback, support and accountability it would still be just a "good idea". It was not all smooth sailing on the personal journey but I am thrilled with what was achieved. I'm excited about what is to come with this project, and I would not hesitate to embark on another End Game program. Thank you Emma and the Wide Angle Team." Lisa Gormley

“The End Game program is a terrific opportunity for film makers, at any point in their career. You can take on a twelve week challenge to pursue whatever department you like within film making in order to broaden, test, and challenge your film making skills. To be able to access the knowledge, the gear and the wide angle space, as well as the network of talented film makers willing to support the projects is gold. We are very lucky to have this program and I encourage film makers in the earliest stages of their career and those who have worked in the industry who have always wanted to test the waters in other areas to give it ago.” Franz Docherty

"Have a goal in mind but keep putting it off?  What are you waiting for - sign up to End Game!  You get a mentor, I was lucky to have the extraordinary Emma Wilson, who will check in with you weekly to offer sage advice and motivation to ensure you are making steps toward achieving your goals.  This program is an invaluable resource and I recommend it to everyone at any stage of their career." Elise Vout

“End Game was exactly what I hoped for and more. My goal was to make a short film and after twelve weeks, I have made a short film. It gave me the framework and motivation I needed to finally achieve this long held dream. I learnt a lot about myself, the filmmaking process, and the generosity of others. Emma was such a great Mentor, so much wisdom, advice, insights, knowledge and care. Wide Angle’s staff, resources and equipment were so helpful. Thanks to End Game, I have taken a huge step forward in my journey as a filmmaker and am excited about continuing down this path.” Gwyd Jones

“I completed End Game during a particularly busy period when I was juggling several jobs and creative projects. Having the deadline of a presentation, and weekly feedback from Emma, gave me the motivation and accountability I needed to carve out the time to continue working on my video series, Mixed Up. Emma’s clear cut advice was invaluable in helping me narrow down a multitude of ideas into a manageable goal. Being a freelance creative can be isolating so it was great to have the support of a community and mentor who had confidence in the value of my project.!”  Stephanie Jack

Vivien Mason - design and fabricate merchandise that relates to her animation
Matthew Newell - self-promotion as an actor.
Felicity Wilkinson - commence training or an internship in Continuity
Dylan Burgos - pre-production for a web-series
Belinda Bradley - shoot a scene from a short comedy script
Patrick Noble - complete a first draft of a script and edit a short film
Jack Bryce - approach an actor's agent

"What a ride! At the start of End Game I was bright eyed and bushy tailed with an end goal clearly in my sights, then along came COVID lock down and everything shifted. Through this time End Game was a shining light, with a weekly personal check in from Catherine as my Mentor to keep me on track with reaching for my goals, as re-aligned to meet the times, and offering me some well-considered tips along the way. I’m so pleased I did End Game when I did. Thank you Catherine, Abi and Wide Angle." Felicity Wilkinson

"The value for me in participating in End Game was really having to think through and articulate my goal/s and to keep having to articulate what I was doing towards achieving the said goal. My goal actually shifted during the course of the program and I really appreciated having the input and encouragement from Abi and Emma in this rethinking and new direction... and this is something that I have continued to work on it since finishing the three month program. Thanks Abi, Emma and Wide Angle Team!" Rebecca Thomson

"The End Game initiative was fantastic! I gained so much knowledge from the Wide Angle team and met many great filmmakers along the way. Thank you all so much for your belief in me and support along the way." Darran Petty

"End Game was a fantastic opportunity for me in many ways. I have been teaching Media Production in schools for the last 23 years but now I have decided to work in the Screen Industry. I am developing my own business, acting, directing, editing and writing. End Game gave me the opportunity to meet people who are working in the industry and work with them. It also extended my knowledge about the processes used in the industry that are different from those used in a school environment." Tara Bufton

"End Game has been such a fantastic experience. I have learned, grown and been more hands-on as a filmmaker through this initiative than I have in a whole semester at university. The extensive support, goal-making, accountability and weekly check-ins and tasks have made a screen dream of mine possible. A film that I had not been able to complete in six years and I was able to bring all the pieces together through this program and the doors that it opened. I am forever grateful that I was given the amazing opportunity to be part of this wonderful initiative." Lauren Watson

"When I entered End Game I did so without a clear idea as to which direction to go in relation to pursuing my acting career in Film and media arts. End Game provided a structure through which I was able to set goals and pursue them with the confidence that I would be able to complete them. The three month deadline pushed me to undertake challenges and step outside of my comfort zone. I have been able to develop a brand that reflects my capabilities as an on-screen actor, produce a show-reel, create the foundation of a professional social media presence, create a personal website and work towards getting representation. During End Game I was supported with advice, coaching and encouragement, even when progress seemed incredibly slow. In the end I achieved far more than I originally set out to and I'm incredibly glad I pursued this opportunity." Jon Lenthall

"End Game is a brilliant initiative.  Teaming up newcomers with the experienced film professionals at Wide Angle Tasmania creates an environment where much can be achieved in a short time.  Learning so much so quickly was sometimes overwhelming yet exhilarating.  End Game doesn’t just teach knowledge it opens one’s eyes to the world of filmmaking. It helped me develop contacts in the industry that are vital to the realisation of my vision. Looking back at my application, I achieved more than I hoped for, including the confidence to persist." Frank Formby

"I originally enrolled to complete a writing project but I soon realised that using the three months to really push myself forward and see my words come to life was a possibility. With encouragement and constructive support, the barriers that had stood before me began dropping away. Amazing people in the local screen community were open to give their support, advice, time and positive vibes to the project. Wide Angle is an asset to the Tasmanian Screen Industry and without them and I would not have know where to start to move my creative career forward." Ben Morton

"I was able to successfully complete my intended goal of a TV series one pager and pilot episode. The support and guidance given to me from my mentor Emma Wilson has been invaluable... I highly recommend the End Game initiative to anyone who needs a push in the right direction to achieve their goal!" Cathy Allen Jan 2019

"Over these past 3 months, as designed End Game helped TAS CASTING achieve our business and personal goals. Having just started a new business venture we found ourselves overwhelmed with ideas, goals and tasks. Sitting down with our mentors for the first time clarified our main goals and compacted what seemed unachievable into bite sized very manageable pieces. What we didn’t expect was once goals were clarified we also became very inspired. While chipping away at these goals we managed to achieve them and so much more. Being held accountable and having advice throughout the process was excellent for our productivity. We will continue to use these valuable skills and resources well into the future."
Lisa Gormley TAS CASTING

"Over the past three months I had the pleasure of being a part of the first round of End Game. End Game was a fantastic program ran by Wide Angle that required you to be responsible for your own goals. I would recommend End Game to everyone that needs help starting their careers or just needs that little extra push to achieve something. Emma was fantastic and always made you accountable for your tasks and I loved every moment of it. Sometimes you just need a push, End Game is that push." Andrew Hinze