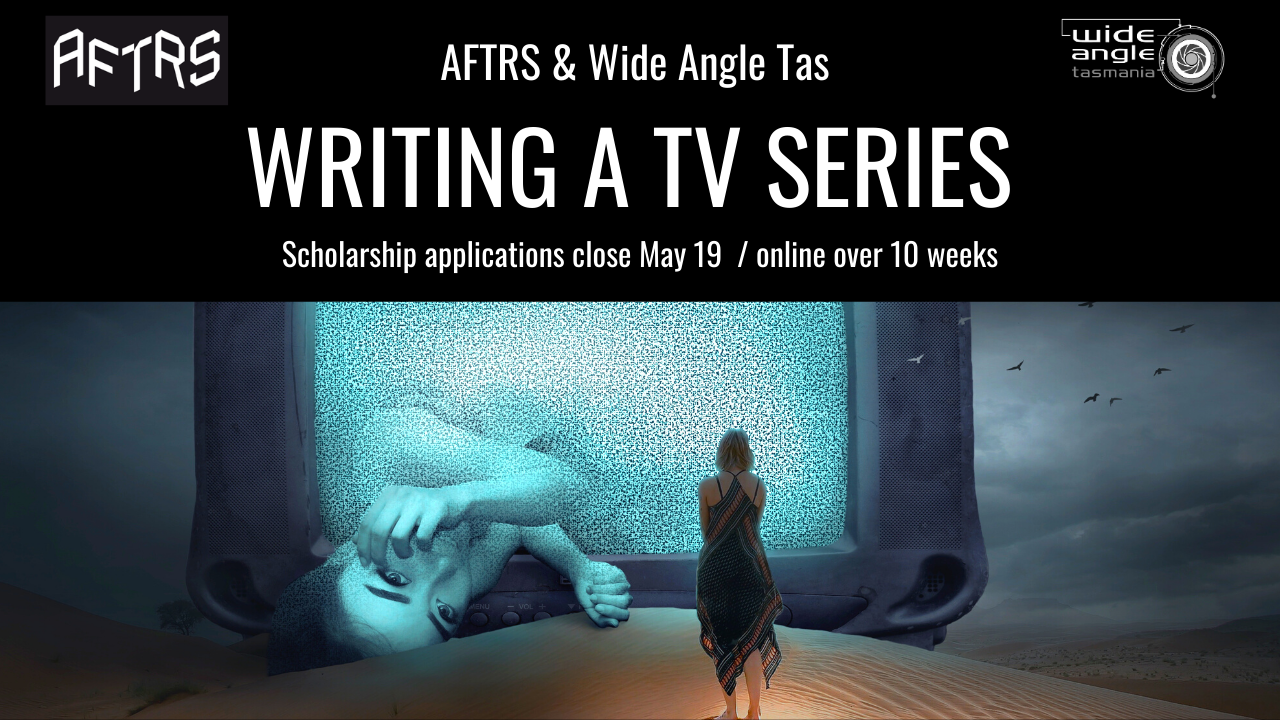 Applications closed on May 19, 2021 and the scholarship to attend the ten-week online course was awarded to Elli Iliades.  Elli is a writer and director from the north west coast of Tasmania. Elli has a background in theatre and film studies from the University of Queensland. Her short films Waiting for Angeland Theodore’s Gifthave screened at film festivals in Australia and overseas. More recently, Elli received support from Arts Tasmania to assist in the production of her short film, So Much Smoke, an adaptation of the short story by author Félix Calvino, which will be produced in July 2021. In June 2020, Elli received project development support from Screen Tasmania for her feature film, The Boarder, a drama set in the Tasmanian countryside.

About the Scholarship
Would you like to learn the fundamentals of creating viable and original TV drama and comedy series concepts in a ten-week 100% online course?  AFTRS (Australian Film and Television Radio School) and Wide Angle Tasmania are offering a scholarship to one Tasmanian member to attend this course.  You will be guided through the process of concept creation – from idea inception to concept presentation.

The scholarship includes the course fee (valued at $1,188).

In July 2019 Briony Kidd was awarded a scholarship to attend a Script Assessment Workshop in Sydney.  Briony grew up in Tasmania and is a graduate of VCA School of Film & TV in Melbourne. Her best-known short Gothic melodrama,The Room at the Top of the Stairs, screen to acclaim on AMC’s Shudder platform. Her short thriller Watch Me will soon be released as part of an anthology feature from Megan Riakos’s Cedar & Hemlock, in association with Enzo Tedeschi of Deadhouse. Her feature screenplay,the ‘psychobiddy’ thriller The Motel at the End of the World, is currently in development supported by Screen Australia and Screen Tasmania. Most recently, Briony directed three music videos for the artist Costume. Briony is also a theatre-maker, freelance writer and reviewer, curator and script editor.  After completing the course Briony reflected:

“I am grateful to Wide Angle Tasmania for providing this fantastic opportunity! To spend the weekend learning from one of the country's top development executives was of huge benefit at this stage and will enable to me proceed with confidence as a script editor, as well as to seek work as a script assessor. The insights imparted were valuable to my own processes as a screenwriter as well. I found that Chris's approach was very clear, open and collegial. I particularly appreciated his sensitivity to the needs and intent of the writer, as central to a successful development process.”
Briony Kidd, July 2019

In 2020 Wide Angle was pleased to continue it’s partnership with Australian Film, Television and Radio School to provide scholarships for Tasmanians to travel to Sydney and attend industry short courses – with the additional support of Screen Tasmania’s Industry Development Program.  In March 2020 Martine Delaney was selected to attend a Legal Essentials workshop in Sydney.

“David Whealy has the most amazing mind. Over the two days of the AFTRS Legals Essentials short course, I was constantly blown away by his encyclopaedic knowledge of the legal and financial minefields of film production. Coupled with his relaxed and confident delivery style, it made for a course I’d heartily recommend to any emerging producer who wanted to gain the legal and financial knowledge and skills to deliver a completed screen story - without ending up in a legal mess and broke, perhaps even making some money.”
Martine Delaney, March 2020